It was once thought that a proliferation of time-saving devices and automation technologies would generate an over-abundance of free time. In the not too distant future, we would all be living life like George Jetson. What happened was the opposite. Time-saving technologies accelerated expectations and collapsed production cycles. The more advanced technology got, the more the pace of work accelerated.

It is what Matt Ridley describes as The Red Queen Effect:

“If a competitor makes an improvement, you must make an equal or greater improvement just to stay neck-and-neck with them. Stay the same and you fall behind.”

The Impact of Rapid Change

Ridley’s hypothesis was about evolutionary biology but it applies to business and social systems as well. Systems assimilate and adapt to any improvement and raise the bar for success and survival accordingly.

If your automated assembly line could produce a widget faster and cheaper, did that increase margins and provide breathing space for the manufacturing process? No, clients just expected products to be delivered faster and cheaper. Amazon has taken that to the Nth degree as now you can purchase products on Amazon with same-day delivery, at the lowest cost and get free shipping. Adolescents who once communicated when they got together with small groups of friends at the lunch table or for a brief period after school in person are now subjected to a 24/7 barrage of multiple social media channels, that include everyone at school as well as a global net of photoshopped, digitally enhanced influencers, virtual acquaintances and targeted nonstop advertising formulated, personalized and targeted by mountains of personal data processed by machine intelligence.

This scenario has played out over and over in every vertical and area of human endeavor as successive waves of digital transformation push us closer and closer to working and living at the speed of electrons. This is an environment our neurobiology and metabolism did not evolve to handle. We have evolved in an analog world that moves at a fraction of the speed of the accelerating digital universe. The world we spent millennia adapting to has changed radically, practically overnight. Large-scale, abrupt changes in the environment cause mass extinctions in nature as species cannot adapt to sudden large-scale change. We are seeing plenty of evidence of stress, anxiety, and destruction - creative and otherwise due to the accelerating pace of change.

A Confluence of Accelerating Changes

In addition, we need to consider that technology does not exist in a vacuum. The biggest accelerator of digital transformation in the last decade was not driven by technology, it was the COVID pandemic. Changes that may have taken years were enacted in days. The way we work, interact, and transact has been completely transformed by the pandemic and the changes look to be long-term and structural.

In addition to changes from technology and pandemics, the rate of climate change is exceeding the initial projections. Climate change is stressing food production systems, infrastructure, and electrical grids. So we are seeing an accelerating change in our natural environment as well as our digital environment. And if all that isn’t enough the economic system that has brought growth and prosperity to the developed world since the Bretton-Woods agreement of 1944 looks to be faltering. Our economic, political, and social systems are being stressed to the max by this confluence of changes and the rate of change is accelerating.

Humans are not capable of thinking and acting at the speed of electrons, but our machines are, and that brings me back to the subject of technology. Not much point in wringing your hands at the march of technology as it is not slowing down in the foreseeable future. Better to harness the tools and benefits technology provides to deal with the challenges we face. Along with the challenges and disruption, new technology brings new capabilities, benefits, and opportunities.  For businesses, institutions, and governments seeking to be agile and intelligent enough to survive and thrive in this environment of unprecedented change, technology is the indispensable enabling component. To meet these challenges futurist Ray Kurzweil and visionary entrepreneur Elon Musk see humans merging with machines as the future of humanity.

Our Cyborg Future is Here

Biotech startup Synchron has received FDA approval to begin human testing of its implantable brain-computer interface. Elon Musk’s startup Neuralink is planning on beginning clinical trials implanting a chip in a human brain in 2022. The initial application for these implants is for people with spinal cord injuries, but as the technology advances the range of applications will expand exponentially. According to a 2020 study covering Europe and North Africa commissioned by cybersecurity firm Kaspersky acceptance for human augmentation is growing.

It’s curious that the further North in Europe you go the more skepticism about human augmentation grows. I’m not sure what to make of that. Perhaps that would make an interesting avenue of inquiry for some enterprising researcher.

We are beginning to see the legal implications of the digital augmentation of humans.  In “Riley v. California” in 2014, the Supreme Court opinion stated:

“modern cell phones . . . are now such a pervasive and insistent part of daily life that the proverbial visitor from Mars might conclude they were an important feature of human anatomy.”

The Court in its decision applied the 4th amendment to the data on a person's cell phone as the phone although not embedded in the body has become an appendage of the person.

Even if we don’t have chips implanted in our brains our transition to our cyborg future is well underway. We are connected 24/7 by our smartphones, fitness devices, and smart speakers. Even our social interactions are now mediated and monitored by machines through all-pervasive social media. Business decisions are now commonly augmented by machine intelligence through the use of machine learning and deep learning algorithms that can process data and produce actionable intelligence at rates that dwarf human abilities to process information. Edge computing is pushing advanced machine intelligence into our, homes, businesses, and pockets.

As the infamous Borg said in the Star Trek TV series: “Resistance is futile. You will be assimilated”. Assimilation is a lot easier than one might think. Although many died for our freedoms, it turns out we have been willing to give them all up for free shipping and more likes. The path of least resistance is hard to resist and digital services are always ready to deliver more convenience, more speed, and more ease of use. It’s how Mark Zuckerberg and Jeff Bezos conquered more of the world’s population than Genghis Khan or Alexander the Great in a fraction of the time and without firing a shot.

What about the moral and ethical implications of human augmentation? That will likely get sorted out after the fact. The Red Queen effect we cited at the beginning of this post insures that no government, business, or individual will want to be at a disadvantage to potential competitors. Imagine trying to carry on business today without a smartphone and internet connection. At the pace the technology is evolving, embedded augmentation may become a necessity to be able to function in our not-to-distant future society. So despite the reservations of many, expect it to be full speed ahead on the merger of human and machine!

What is hype and what is real in the Metaverse in 2022? A look at the challenges and opportunities in the near and long term of Metaverse technology. 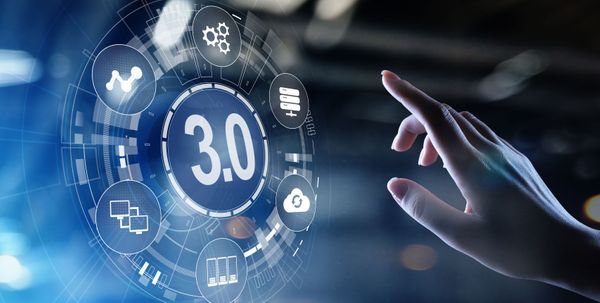 What is Web 3.0 (Web3)? Let’s have a look at what the potential impact will be of the confluence of edge computing, third-wave AI, blockchain, and front-end agnostic structured content on the digital experience.

—
The Accelerating Rate of Change and Our Cyborg Future
Share this